Having Faith Beyond Football

Before the heightened calls for racial and social justice exploded in 2020 – before the deaths of George Floyd and other unarmed people of color that turned the thick wedge between many communities and law enforcement into a chasm – Liffort Hobley was already working with others to
bridge that divide.

Hobley, now president of the Dallas chapter of the NFL Alumni Association, has been active with NFL Alumni since his playing days in the early ’90s. Through an enterprise partnership with the Helping others Prioritize Education (HOPE) Initiative, led by CEO and educator Dr. Robert Harper, the Dallas chapter is working to foster mutual understanding between law enforcement officials and communities who are wary of them, as well as to promote more effective hiring on the law enforcement side.The Dallas chapter-HOPE Initiative partnership began in 2018. It’s just one of the programs Hobley is deeply involved in nearly three decades since his football career came to an end.

“We’re just looking for opportunities to teach kids there’s a better way of moving around your communities without being afraid to take a step outside your door, thinking that … you’re going to get stopped, or you’re going to get harassed, or you’re going to get shot just because you’re a young man or a young woman of color,” Hobley said in an interview. Meanwhile, he added, “we want to teach these same things to police officers. That’s been very helpful for them to understand how the kids of the
community and how the kids of color feel when they’re walking around or when they’re approached: that they’re afraid basically every time they walk out the door.”

In Hobley’s mind, he’s doing the same kind of community-focused work today that he did as a player. For example, working with law enforcement is nothing new to him; as a Miami Dolphin, he traveled to scores of Florida elementary and middle schools every spring as part of the then-ubiquitous,
police-driven DARE program to discourage drug use.

Circa those days, he didn’t wait for retirement to get involved with NFL Alumni.
“As an active player, I actually participated in a lot of their events. It’s just been an opportunity to look at, ‘Hey, this is our shield. Let’s protect it, let’s support it.’ … If you’re a former NFL player, you just kind of look at opportunities and support those opportunities,” he said. “It keeps you staying active in the community. Wherever you live, it keeps you active and relevant.”
After a highly successful college career at LSU in which Hobley earned first team All-SEC honors as a senior in 1984, the Pittsburgh Steelers selected the Shreveport, La., native in the third round of the 1985 NFL draft. But he never played for the Steelers, latching on with the then-St. Louis Cardinals instead for five games in his rookie season. 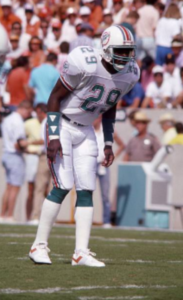 “Of course, third-round draft choice, you’re thinking that you got it made. And of course, I got fired three weeks into the preseason,” he said. “I ended up basically moving around and bouncing around as a free agent for at least two years before I  found a home.”

That home was Miami, where he landed with the Dolphins in 1987, playing six seasons there during the Don Shula-Dan Marino era. The Dolphins reached the playoffs twice in that span, including a trip to the 1992 AFC Championship game. Hobley started 29 games in his career, picking off five passes and recovering eight fumbles. He missed all of the 1991 season because of a knee injury.

But the adversities of injury or being cut paled in comparison to the pitch-dark cloud that cast itself over his life the year before. During the 1990 preseason, Hobley’s 5-year-old daughter, Lyrick, drowned in a backyard pool while being cared for by a babysitter at a family friend’s house.
At the time of that devastating event, Hobley and his family leaned on the support of his football family. While Lyrick’s death is “something you never get through,” he says that emotional reinforcement has been continuous.

I’m not going to sit here and say, ‘Hey, I’m going to church every Sunday.’ But life has been good for me based on how I treat myself, how I treat people. And that’s what it looks like for me – Liffort Hobley

“With the support I had from a great leader – from Coach Shula and all of my good friends that were part of the Dolphin family dating back to every player that played – it was comforting to have that as I went through that process and my family went through it,” he said. “It’s definitely great just having family around, and then of course having a Dolphin family, from the ownership to every player that ever played there supporting [you]. And then of course having the support of all the NFL players that were active in just saying, ‘Hey, we’re with you.’
“Everyone has a story, and  stories like this are unfortunate. But they happen to just every normal, walking-down-the-street moms and dads all the time. That’s how I was able to … not get through it, but move forward.”
After his final, injury-marred season in 1993, Hobley went straight into the Dolphins’ front office, serving as player program coordinator from 1994 to 1997.

He worked as a marketing director and a corporate meeting planner before settling in Texas and entering the tax and accounting software
industry in 2001. 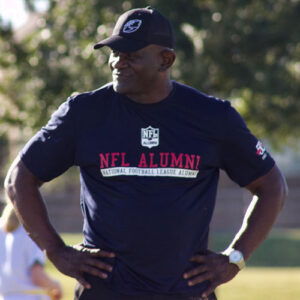 His recent work with NFL Alumni includes a recent COVID-19 vaccination event in downtown Fort Worth in September 2021, and he hoped to team up with local health care organizations for more events. The chapter is also working on programs to generate health care coverage for all NFL alumni.

And there’s the work with the HOPE Initiative, which he says has generated mutual support between the Dallas chapter and the Dallas and Fort Worth police departments. NFL Alumni also uses virtual connections to engage in social justice work outside Texas.

“We want to let both sides know that there’s a better way, and the better way is having the right people for the right jobs,” Hobley said. “If we can focus on getting the right people in the right jobs when it comes to law enforcement … if you’re looking to be a law enforcement officer, and you’re really serious about your job, then of course you’ll be serious about the law and how you operate in communities when it comes to supporting a community.”
“Faith” means something different to everyone. For Hobley, faith is less about scripture and prayer, and more about his own daily approach to life and people.
“I’m not going to sit here and say, ‘Hey, I’m going to church every Sunday.’ But life has been good for me based on how I treat myself, how I treat people. And that’s what it looks like for me,” he said. It’s not every word that comes out of a book. It’s based on how you focus on life itself, and … you don’t have to worry about how people view you. You have to worry about how you view you as a
person.

“If you treat people real well and do the right thing, then of course, you don’t have to worry about faith. Your faith should be based on who you are and how you move around every day.”